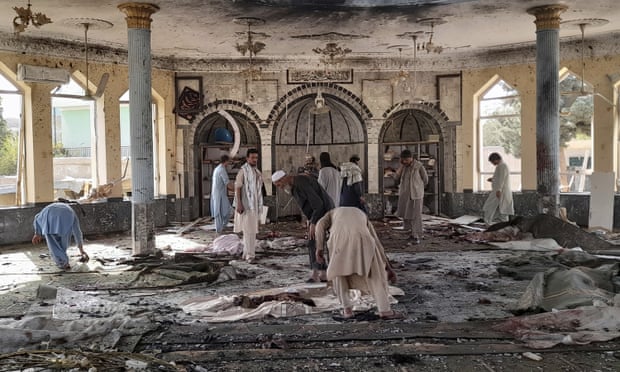 The suicide bombing killed roughly around 50 worshippers attending the Friday prayers. This attack was yet another attempt to undermine the Taliban control in Afghanistan

On Friday, 8th October a local mosque in the city of Kunduz underwent a suicide bombing. The suicide bombing targeted at the front rows of the mosque is reported to have killed roughly 50 worshippers. All those affected belongs to the ‘Shiite’ (Shia) caste, the people were gathered their to offer their Friday prayers.

As soon as the news of the attack broke out, Islamic State group (ISIS) who are now the bitter rivals of Taliban claimed the attack. With Taliban slowly trying to stabilize their newly form government, this attack is surely an attempt at destabilizing them. This was the second time since Taliban’s capture of Afghanistan that the ISIS have plotted an attack in the country. Just a month back the ISIS took responsibility of an attack at the Kabul airport thus embedding a fear of ISIS in Afghanistan.

Apart from those dead the suicide bombing also injured a great amount of people inside the mosque. Medical workers at hospitals including Kunduz Provincial Hospital and MSF claimed 35 and 15 people dead respectively. The doctors also said that a numerous amount of injured people are being provided with emergency treatment. Doctors fear the increase in more injures along with rise in death toll.

Taliban spokesman ‘Zabihullah Mujahid’, while breaking the news stated that “an explosion took place in a mosque of our Shiite compatriots”. The spokesman however released no details. Matiullah Rohani who is the director of Culture and Information in Kunduz, later released the insight details.

The timing of the attack was the Friday prayers, which is the time of the week mosque’s experience the most number of worshippers. It is suspected the attack is not for specific personality but its main purpose is to out maximum loss.

A local Afghan while defining the situation said that “Ambulances were going back to the incident scene to carry the dead”.