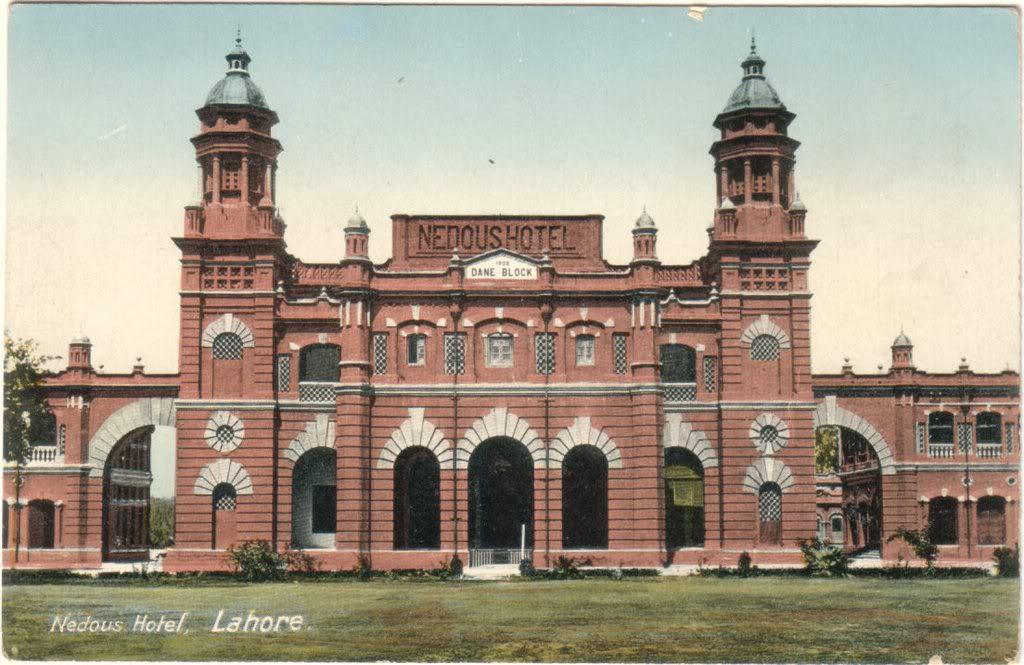 The Nedou’s Hotel was founded by Michael Adam Nedou, who came from the medieval port city of Ragusa ( Dubrovnik). Michael Adam Nedou an architect by profession was in India to construct a palace for the erstwhile Maharaja Of Gujarat. That’s how the Nedou’s journey began.
The Nedou’s built their first hotel in Lahore in 1880. It was long known for being a gracious & beautiful building. It is situated in one of the best areas of Lahore facing Mall Road. The hotel is adjacent to Mela Ram’s Building (where now stands WAPDA house).

By the early 1950s, it ceased to be Nidou’s Hotel. Later, it was converted into an office of West Pakistan Public Relations Department. Later, in the late fiftees, it came to be known as Park Luxury hotel when a new structure was erected in its place by demolishing the original one. After over a decade, Park Luxury hotel was also demolished. Afterwards a new structure (Present Avari) was put in its place, but then it was named as Hilton Hotel. In the early 1970s its nomenclature was changed to Avari Hotel, when Behram D Avari took charge of its management.

Michael Adam Nedou’s son Harry Nedou’s was the businessman; his brothers, Willy and Wally, willied and wallied around; his sister, Enid, took charge of the catering and her pâtisserie at their Lahore hotel was considered ‘as good as anything in Europe’.

Harry Nedous married to a Kashmiri girl (a milkmaid) – Harry Nedous first caught sight of Mir Jan when she came to deliver the milk at his holiday lodge in Gulmarg (Kashmir). He was immediately smitten, but she was suspicious. ‘I might be poor,’ she told him later that week, ‘but I am not for sale’. Harry pleaded that he was serious, that he loved her, that he wanted to marry her. ‘In that case,’ she retorted wrathfully, ‘you must convert to Islam. I cannot marry an unbeliever’. To her amazement, he did so, and in time they had 12 children (only five of whom survived). Brought up as a devout Muslim.

Their daughter Akbar Jehan (Later wife of Sheikh Abdullah) was a boarder at the Convent of Jesus and Mary in the hill resort of Murree.

According to writer Tariq Ali, in his book “Bitter Chill of Winter” about Akbar Jehan’s first marriage with Col T.E. Lawrence (Lawrence of Arabia) was not the lifelong bachelor he has been made out as. He went through a brief marriage in Lahore. This was revealed to Tariq Ali by a senior civil servant from Kashmir who had been told by Benji Nedou, the brother of the bride. Ali said, While Lawrence was stationed in India he used to go to the city of Lahore like many other officers, to relax. It was known as the Paris of the East and the Nedou’s family had a hotel there that was popular with soldiers wanting to rest and drink and so on, and that is where he met her

In 1928, when a 17-year-old Akbar Jehan had left school and was back in Lahore, a senior figure in British Military Intelligence checked in to the Nedou’s Hotel on the Upper Mall. Colonel T.E. Lawrence, complete with Valentino-style headgear, had just spent a gruelling few weeks in Afghanistan destabilising the radical, modernising and anti-British regime of King Amanullah. Disguised as ‘Karam Shah’, a visiting Arab cleric, he had organised a black propaganda campaign designed to stoke the religious fervour of the more reactionary tribes and thus provoke a civil war. His mission accomplished, he left for Lahore. Akbar Jehan must have met him at her father’s hotel. A flirtation began and got out of control. Her father insisted them to get marry immediately; which they did. Amanullah was toppled in Januray 1929, and later replaced by a pro-British ruler.

On 12 January, Kipling’s old newspaper in Lahore, the imperialist Civil and Military Gazette, published comparative profiles of Lawrence and ‘Karam Shah’ to reinforce the impression that they were two different people. Several weeks later, the Calcutta newspaper Liberty reported that ‘Karam Shah’ was indeed the ‘British spy Lawrence’ and gave a detailed account of his activities in Waziristan on the Afghan frontier. Lawrence was becoming a liability and the authorities told him to return to Britain. ‘Karam Shah’ was never seen again. Nedous insisted on a divorce for his daughter and again Lawrence obliged. Four years later, Sheikh Abdullah and Akbar Jehan were married in Srinagar. The fact of her previous marriage and divorce was never a secret: only the real name of her first husband was hidden. She now threw herself into the struggle for a new Kashmir.

She raised money to build schools for poor children. And she encouraged adult education in a state where the bulk of the population was illiterate. She also, crucially, gave support and advice to her husband, alerting him, for example, to the dangers of succumbing to Nehru’s charm and thus compromising his own standing in Kashmir, and died on July 11, 2000)