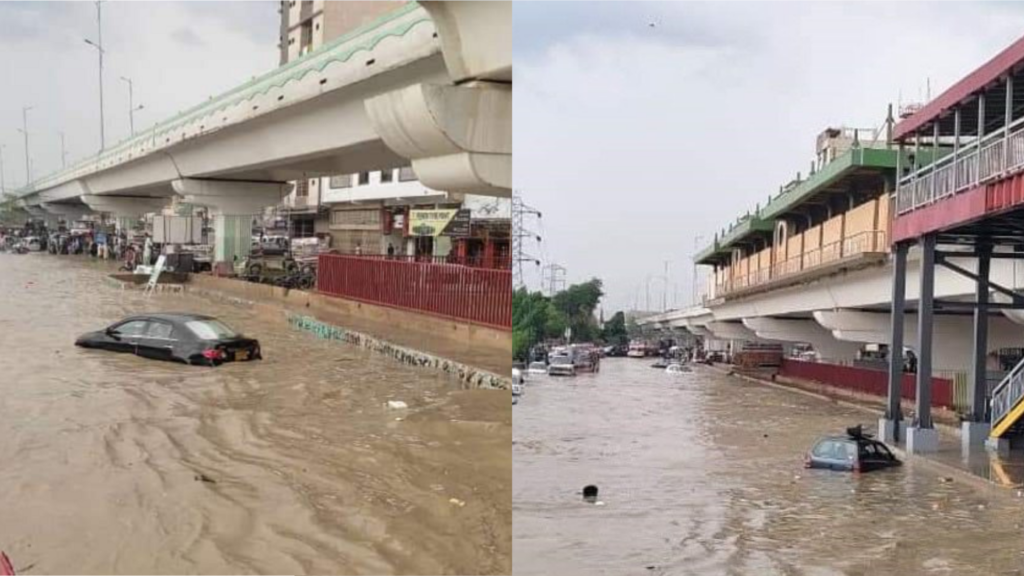 Areas including North Karachi, North Nazimabad and Nagan were all flooded after a rain shower. Smaller vehicles got submerged in water were left stranded on main roads

On Thursday 23rd September, Karachi as per expectations recieved another one of continuous monsoon showers. This one however was quite harsh on the residents of Karachi. A big part of Karachi’s residential areas, mostly in the central district got affected. Apart from losing their vehicles, people also had to deal with rain water getting inside their homes thus damaging furniture and other items.

The rain started at around 12 in the noon and went on in light showers for a few hours. Though the rain showers were light, they caused in overflow in the central districts drainage and wreaked havoc over people stuck on roads. Several people including the elderly and young students were found clinging onto road dividing iron grills so that they don’t fall over into the water.

While residents and their property kept suffering, no responsible political party came up. This flooding gave the Karachities a flashback of last year’s devastating urban floods. With urban floods happening each year, the beautiful monsoon season have now become a disaster for people in Karachi.

The Green line structure blamed to be the reason behind flooding

Several authorities in the central district have warned people that the situation may not improve in the foreseeable future. They claim that the Green line bus infrastructure passing through the whole of Central Karachi has blocked the entire drainage system of the central district. They say that this is exactly the reason why even small rain showers are flooding areas such as North Karachi and North Nazimabad.

Sindh Government representative ‘Murtaza Wahab’ spoke to media about the situation. Murtaza like others also blamed green line to be the reason behind the central district floods. “I have remained at Nagan Chowrangi intersection for more than six hours but my team and heavy machinery failed to clear the road. The Green Line project has been built in the middle of the road with no drainage system in place. The company finally found a solution and installed two small pipes for that purpose. Last year we had witnessed a similar situation after rains and this year it’s same again. We have formally and informally requested the SIDCL to fix this problem but they don’t pay heed. The situation here [at Nagan Chowrangi and Shershah Suri Road] would not improve if they [SIDCL] don’t fix it”. said Murtaza in his interview with news channels.