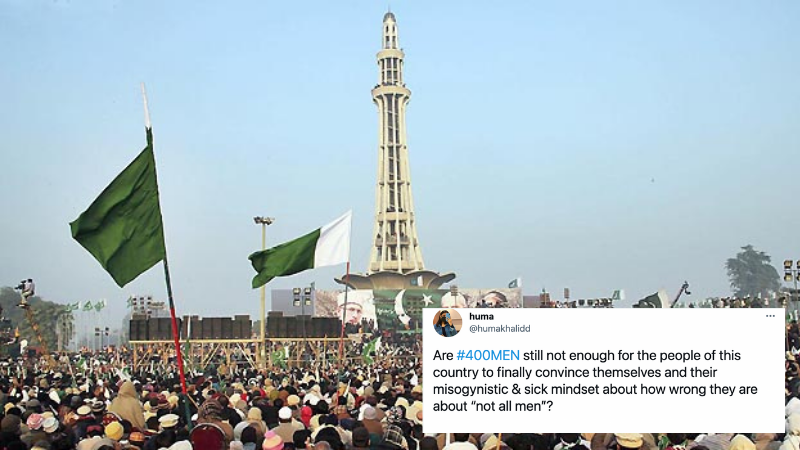 “I looked towards the sky and called out Allah, while hundreds of men continued to assault me. I prayed to Allah to enfold me into the ground just like the women in Karbala”, said Ayesha Akram, victim of assault at Minar-e-Pakistan

LAHORE, PAKISTAN – On 14th August, Minar-e-Pakistan was packed with people celebrating Pakistan’s independence. Between the independence celebration took place. A horrifying mass assaulted a female TikToker named Ayesha Akram. The assault involved around 400 men who constantly groped, pulled, and tossed her around, while also tearing apart her clothes.

Reports regarding the assault state the assault started at 6:30pm and went on for about 2 and a half hours. Men of all age groups, throwed and inappropriately touched Ayesha for the whole 2.5 hour time period. The victim after facing severe assault, finally made it out of the crowd at around 9:00pm.

Ayesha and her team constantly tried to reach out to Police departments, however no one came to help. Ayesha after the assault went and reported the event to police. The police as of now has charged an FIR against 400 unidentified men and is also actively working to identify and catch them.

The men while assaulting her, also filmed the assault and uploaded the videos on different social sites. These videos started to gain momentum after about two days of the mass harassment. The details of the assault shook people living in Pakistan and also further traumatized many young girls. This surely was a moment for Pakistan to reflect upon what they have become as a society.

Details of the assault and Ayesha’s interview

It all started at around 6 in the evening, when Ayesha who is a well known TikToker, went to the independence celebration at Minar-e-Pakistan. Ayesha went there alongside her media team who help her making TikTok videos. Ayesha alongside her crew was there to create a 14th August TikTok in front of Minar-e-Pakistan.

Soon after Ayesha went there, a storm of people who recognized her from TikTok circled around her and constantly rushed into her and asked for selfies. This constant circling in on Ayesha and her team reached a point where they were cornered against the wired boundary at the Minar-e-Pakistan monument. While hundreds of men continued to circle around them. Watching this the security guard at inside the wired gate allowed Ayesha to come inside the gate.

This however, wasn’t enough for the monsters surrounding her, since they broke down the wire gate and proceeded to go inside and grab Ayesha. Soon after grabbing Ayesha the mob continued with their assault.

Ayesha, after the assault had the courage to come in front of media and talk about the event in detail. After discussing the event Ayesha said, “I was there because I wanted to and have the right to celebrate independence at Minar-e-Pakistan. However, what happened with me cannot be justified in anyway”.

Ayesha later in interview said, “I wasn’t wearing any revealing clothes. I have never made a vulgar video. I was in a proper dress and even before I could sense what’s happening with me, they completely ripped me off my clothes”. She then asked the viewers ”If this is the punishment of being a women in Pakistan”, a question opening the eyes of many.

Soon after the news of Assaults went viral, it caused an outrage on Pakistani social media. People came out and heavily criticized the mobs that assaulted Ayesha. People were shocked at how someone could sexually harass a women in such a large crowd and not have people stop them. Tweets condemning the attack went trending on Twitter.