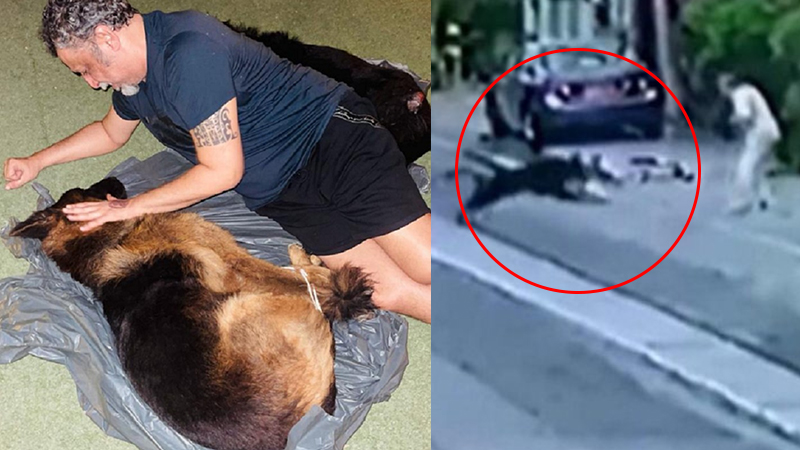 KARACHI, PAKISTAN – Advocate Mirza Akhtar Ali, was attacked by two German Shepherds in the early hours of the morning on the quite street in neighborhood of Khyaban-e-Rahat, DHA Phase VI. He was attacked while he was on his usual morning walk.

A resident named Humayun Khan living in one of Karachi’s poshest area, owned the two canine beasts, the german shephards.

The CCTV footage shows Mirza Akhtar trying to save and defend himself while both the dogs were pounding and bringing him down. While Mirza tried with all his efforts to save himself, he was helpless until the owner’s son arrived and stopped his dogs.

The lawyer, Mira Akhtar Ali was heated up and had reported the incident in the Darakhshan police station. A local court had earlier reserved its verdict over the bail plea of the dog owner. Humayun had acquired bail before arrest, while his employees were in police custody.

Mirza forgave Humayun in the final verdict report where he writes, “I have agreed for the sake of Allah [to] forgive Humayun Khan“, states the agreement – dated July 6 – between the two parties.

However, though the owner directly involved with the incident was bailed, there are still some other stances that need to be considered.

Mirza in his report for the conditions of compromise, has stated, “The two dogs involved in the incident will be euthanized/put down by a veterinarian immediately. Any other such dogs that Humayun Khan has, he shall give them away”.

The condition for compromise further states that, the owner Humayun Khan will register any other such canines in his ownership to the Clifton Cantonment Board (CBC). He will not release any other pet dog on the streets until they are properly trained or are on leash with an owner.

The agreement between the two parties further states that Humayun will tender an “Unconditional Apology” to Mirza Akhtar for the “hurt and injury caused to him“. The final statement demanded Humayun Mirza to donate Rs 1 million to ACF Animal Rescue – a local animal shelter.

Also See: What exactly is the #FreeBritney Movement?

Support of the Celebrities

Many actors from the Pakistani drama industry took this issue to their socials in which they expressed their dismay over the incident. They expressed their anger on how two dogs were put to eternal sleep because of an act of mauling which clearly was the owners fault.

Actors like Mashal Khan, Yasir Hussain and Feroze Khan shared a similar sentiment regarding the matter. The Suno Chanda star took to Instagram and wrote, “In a country where rapists, murderers and pedophiles roam free, two dogs are given the death sentence/euthanized for their owner’s negligence.”

While Adnan Siddique, a well-known Pakistani actor, on his Instagram wrote, “A very inhuman thing to euthanize dogs for mauling. The damage of the attack is three pronged; on the gentleman who was injured, the family that lost their pets and the dogs that were put to sleep.”

In Pakistan though sometimes pet owners adopt animals, but they forget that they need to be trained and sometimes be put on leash. It is saddening to see because of such a negligence of an owner, two animals had to give up on their lives. It is important to take full ownership and control if you decide to adopt an animal to keep in your homes.