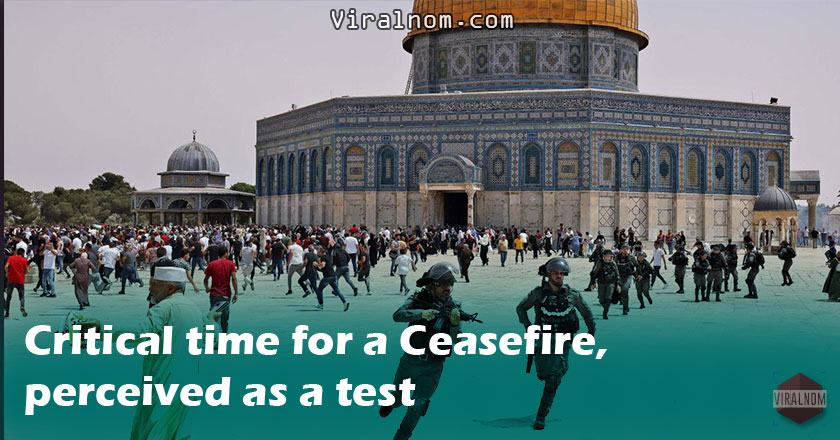 GAZA, PALESTINE – The unrest in Gaza is still visible after the Ceasefire between Israeli-Hamas clash as the Israeli troops and civilians were reported again in Al-Aqsa mosque continuing the routine of conflict and persecution in broad daylight on Friday. Authorities are calling this situation as an early test of a truce.

Israeli forces and Hamas militants agreed on a truce that reinforced an end to this 11-days long brawl which took lives of more than 250 Palestinians including women and children, which displaced more than 50,000 people and left 1900 wounded.

4300 rockets were targeted and fired within the territories of Gaza and 1000 militant targets were destroyed, Israeli Military.

What are the conditions of the ceasefire?

The Israeli Political Security Cabinet has declared the decision of ceasefire as ‘’Unanimous’’. “The political leaders emphasized that the reality on the ground will determine the future of the campaign,” it said. Hamas Militants also agreed to the truce by putting its terms and conditions on the table, both pertaining to Jerusalem.

Israeli Military has not yet confirmed or made a statement about accepting these terms. However, Israeli Prime Minister Benjamin Netanyahu declared that the conflict is not over yet till all the Hamas militant network is not fully undermined.

Both parties at conflict are looking at this truce as a ‘’Victory’’.

What is the UN Response and US uptake?

Since blocked by the US, The United Nations Security Council declared the immediate ceasefire as a most sane decision in recent times keeping the socio-economic condition of the particular region in mind.   Security Council Member France, getting the confidence of Egypt and Jordon, proposed a two-nation solution as an ultimate solution to this un-ending conflict between Palestine and Israel. The establishment of two independent states for both will serve as a resolution of peace.

United States President, Joe Biden commended the Israeli Prime minister for this ceasefire and declared it as a ‘’Genuine Opportunity’’ to progress. Israel is an ally and we support its right it defend itself against discriminatory terror attacks, Joe Biden. The president has also assured the Israeli Government with any kind of aid in case of these conflicts escalate in future.

What is the reaction of the Public of Gaza?

The public lead to streets to celebrate the end of a long massacre against humanity. It is relief and a first time in a fortnight people are coming out fearlessly and feel safe, Palestinian resident.

Palestinian families went to see the rubble and smashed glasses of what used to be their homes. Many mourned the deaths of their loved ones and destruction of their dreams. It will take thousands of years to rebuild the city and bring it to level the city was at before the airstrikes, Gaza Victim.

Many Palestinians went on an organized strike to condemn the Israeli Military Brutality within their premises. The businesses were closed on Tuesday in solidarity with the families of the displaced, the wounded and the martyred.