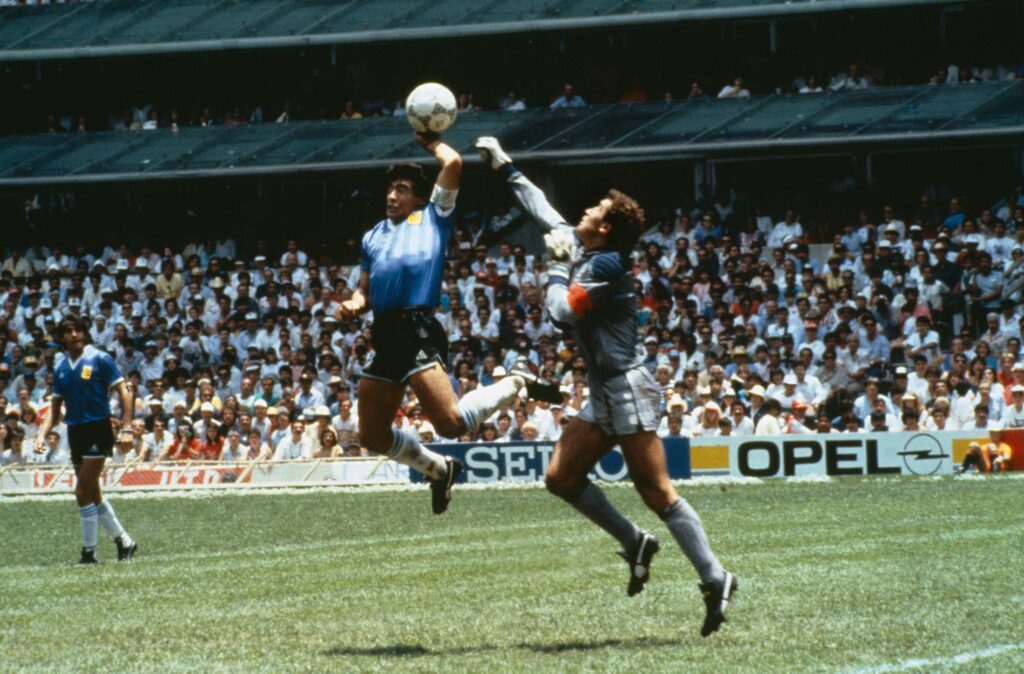 Since the football world cup is coming to an end. It is the highest time we should remember the top 5 goals ever done in the history of football. Maradona to Lionel Messi to Ronaldo, every great player gave one in his career at least.

Football is by far the most played game in the world. The ongoing FIFA world cup broke all the records for viewership and audience presence. But there are a lot of moments when players gave an amazing performance by shooting the greatest goals. Today we will revisit some of the most amazing and unbelievable goals history has ever seen.

Diego Maradona was the greatest player in Argentina. His footwork and stamina were remarkable. His tactics are still copied by many players. This match was where he scored one of the toughest and most controversial goals in the history. It helps the team to reach the finals of the world cup 1986. That goal is known as the “God of Hand” kind of goal.

On June 3, 1997, Roberto Carlos stunned the world with one of the most spectacular free kicks in football history. The left-back scored the most famous goal of his career: an outrageous long-range free kick for Brazil in a 1-1 draw against France in the opening game of the 1997 Tournoi de France, a warm-up tournament ahead of the following year’s World Cup.

Also See: Afridi says only players with a 135+ avg will be selected for T20s

The strike left goalkeeper Fabien Barthez perplexed, as the ball apparently was heading well wide of the target and into the crowd. However, it swerved back, glanced the inside edge of the post, and stopped only when it hit the net. Two decades later, Roberto Carlos says he is still impressed when he sees footage of his kick.

Cristiano Ronaldo had also just scored one of the most iconic and unstoppable free kicks in Premier League history. The goal came in a 2-0 victory at Old Trafford over a Portsmouth side who, at the beginning of proceedings, sat ninth in the league with a phenomenal away record of seven wins in 12. But Harry Redknapp’s Pompey was no match for a Ronaldo-inspired Manchester United who would eventually go on to win a Premier League and Champions League double that year.

Just ten minutes into the match, Ronaldo had broken through and finished calmly past David James to open the scoring and put his side ahead. But the highlight of the game would happen just three minutes later.

Zlatan Ibrahimovic boasts a showreel of goals that would make the very best in the business jealous, with the enigmatic Swedish frontman having forged a successful career out of producing moments of magic. Whether it be turning out in the colours of his country or representing the likes of Juventus, Inter, Paris Saint-Germain, Manchester United and AC Milan with distinction, he can always be relied upon to produce the spectacular.

Among his collection of stunning strikes is an effort against England which landed him the prestigious Puskas Award, with GOAL on hand to help cast a wistful eye back over a flash of brilliance that sums up what the self-proclaimed God of football is all about.

On 30th May 2015, Barcelona met Athletic Bilbao in the final of the Copa del Rey. ‘Los Azulgranas’ came out 3-1 victors that day.

Lionel Messi opened the scoring that day with one of his best-ever Barcelona goals in the 20th minute. Following this, Neymar made it 2-0 to ‘Los Azulgranas‘ before the break. In the second half, Messi scored his second goal of the game before Iñaki Williams pulled one back for Bilbao. However, Barcelona saw the game out from there to lift the Copa del Rey once again.