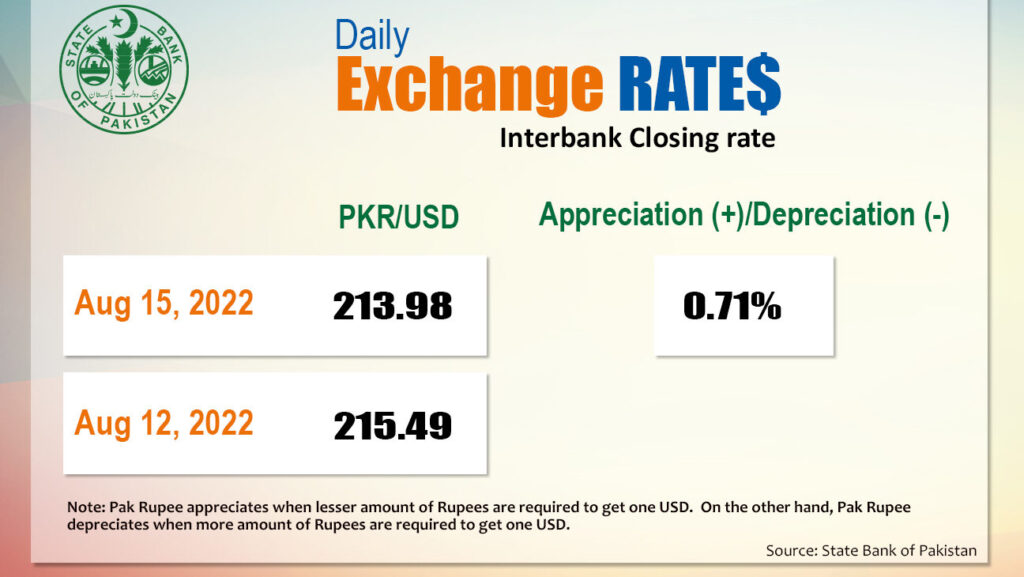 According to the State Bank of Pakistan (SBP), the local currency gained rupees 1.5 or 0.71 percent to close at PKR 213.98 against USD. Pak rupees, which recovered by four percent last week continue to rise on Monday as well.

He added the exporters who were keeping their dollars abroad, we’re also bringing them to Pakistan quickly as the greenback was depreciating rapidly.

Naseer said there was “pressure” as exporters were approaching the government and other institutions to push for stabilization of the exchange rate as they were facing losses. “But this will always happen. The best suggestion is to convert the dollar into rupees on the day the export [consignment] is dispatched and the government and the bank sign a memorandum of understanding in this regard to remove uncertainty”.

He said if Politics remain stable in the coming days, the rupee will continue to gain strength.

Exchange companies Association of Pakistan (Ecap) General Secretary Zafar Paracha “said, this week has started very well. The positive news is coming from every side which has changed the sentiments.

He added that because of positive development, exporters who had been previously holding the dollar were looking to sell them but importers were waiting for the greenback to fall further.

Chairman Forex Association of Pakistan (FAP) Malik Bustan attributed the increase in the value of the rupee to the International Monetary Fund (IMF) Letter of Intent and aid reports from friendly countries, especially Saudi Arabia.

He said: “the market expects payment from the IMF to be receive soon, which will increase the country’s foreign reserves”.

The FAP chairperson said the greenback was originally worth between 190 and 200 but speculators had “artificially inflated it due to economic problems and risk of default”. However, he added that the dollar will return to its true value soon.