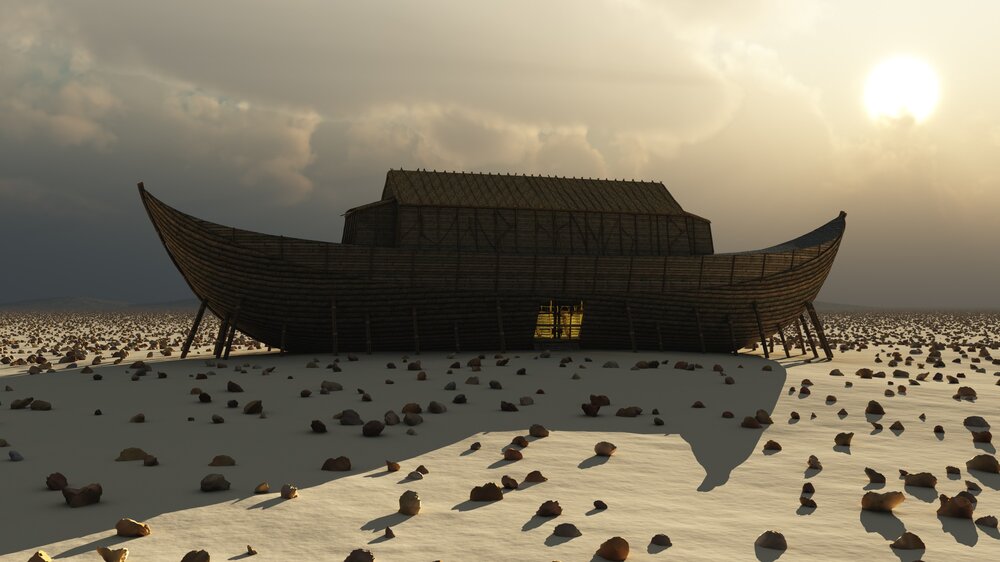 Noah’s ark is one of the famous narrative in history. There are many acknowledged versions of the incident. Noah and His ark has also been mentioned in Bible and Qur’an.

Life is around 60,000 years old on Earth. Whereas the humankind is almost 8000 to 10,000 years old. A lot of incidents happened that has shaped today’s earth. One of the major incidents is Noah’s Ark and flood. It is basically referred to the making of a giant ark prior to the massive destructive flood warned by God/Allah Almighty.

Along with that human race as well as all the living beings said to board on this ship, a pair of each specie to be precise. In a rough estimate there were almost 3,858,920 animals aboard the boat. 14 species of birds are exclusive. It is considered as a miracle that human as well as animals survived such striking flood in the history of mankind. It happened around 6000 years ago.

Interestingly Bible and Qur’an both mentioned this incident thoroughly. It has magnificent importance in both Christianity and Islam as this incident depicted many life lesson for humankind. A lot of research has done in this regard. Even till now scientists and archeologists are trying to find the missing ark. In 2020 it said that the ark was found in Turkey on Mount Arratat. But it is still is a mystery for people and researchers. Lets see what Bible and Qur’an has explained the incident.

Qur’anic Version of Nuh (AS)

Besides both schools of thought validate the incident. There are few differences in their stances. They are wholesome yet an amazing addition for open thinking. According to Islam, Noah was Hazrat Nuh (AS), a prestigious prophet and a man sent by Allah for preaching.

He (AS) was the longest living man on earth. When He (AS) died when he was 950 years old. When Allah sent Him to people, world was fully corrupt and filled with filth. Everyone forgot the true message of Allah and started following Satan.

Hazrat Nuh (AS) preached them as long as possible. But ignorant people refused to accept the true message. After a while Allah sent Him a message that He should build a massive boat and take his family, the believers and animals along with him. He was 600 years old at that time.

After the message, He (AS) along with his 3 sons started building a boat. A lot of people made fun of them and said why are they building a boat when there is not a sea nearby nor a sign of rain. Hazrat Nuh (AS) still tried to warn them from upcoming rain and flood.

But the naïve people did not realize. According to Qur’an, ship was 300 cubits long, 50 cubits wide, and 30 cubits high. Cubits is a standard length of a human arm. Knowing that the people at that time were tall and giants. It was quite a mammoth size boat. It had 3 floors, a small door in the bottom and a big window on the top.

Day before the said date, Hazrat Nuh (AS) again preached people but they made fun of him and his warnings. Noah put the handful devotees, his family and pair of each animal on the boat. According to few references, His (AS) wife dd not join Him.

She was a pious lady, loyal to her husband but she did not want to leave her family and ancestors. Her name is not mention in any Islamic book but few Jewish books and bible says that her name was Naamah. She did not join her husband on the boat.

One of Hazrat Nuh (AS) son named Yam was also a non believer. When the rain came and it started flooding everywhere, Yam climbed up the highest mountain and said, now who can drown me. But water came 20 feet above the mountains and he and Naamah drowned in their arrogance and pride.

It rained around 40 days and 40 nights. Noah’s ark was floating in the water for almost 120 days. When Allah sent them a message, Ark stoped at the Mountain Judi in Turkey. Then after a long time life started again on the earth from there.

While most of the story is quite similar, there are few differences in bible as well. According to the Bible, whole Noah’s ark is a symbolic incident telling them the divinity of Christ. World getting clean up to welcome Jesus Christ and 3 floors of boat depicts heaven, hell and earth.

Noah was a simple farmer and preacher who happened to start building a boat. On the said day he, his wife, 3 sons along with their wives and pair of animals boarded on the boat. So according to them only human DNA left were 5 in number. It was a pause and start incident by God.

The reasons can be overpopulation, or some biological hazard or any other scientific reason. They also believe that Noah was not a sinless person as he once got drunk and embarrassed his son. After the rain stopped the ark stopped at the mountain in Armenia and then Noah died in Armenia because of some flood or disease. So both school of thoughts agreed on few aspects and disagreed on few.

If we talk about modern science, they negate the possibility of this incident. They don’t believe that a ship can be built in such short time without any equipment. Last massive flood was about 4000 years ago in Turkey. Reading fossils and marks, they say that its just a folk story by historians.

They also decline the possibility of removal of whole human kind. They also say that carrying animals of this number and size is also impossible. So it is still a vast and debatable topic in history.